Prior to 2005 few Illinois teams attended NAQT tournaments outside of Illinois. Perhaps, most notoriously, Loyola Academy attended and won the Iowa State Championship in 2004, a year in which it did not even advance from its own regional in the IHSA State Series. People such as David Riley, Linda Greene, and David Reinstein began pushing for more tournaments to be run on good questions like NAQT, which led to a gradual increase in the number of tournaments using the questions, and the number of teams coming out to the NAQT State Tournament. 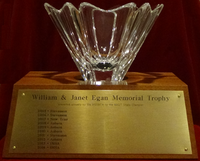