Difference between revisions of "Protobowl"

Protobowl is a website created by Kevin Kwok which allows users to practice quizbowl questions, both alone and against other humans. Users may join a public or private room, and are provided with a random username consisting of a randomly generated adjective and noun, e.g. "exorbitant gull." Users may change their display names at any time, and can adjust the distribution or difficulty of questions that Protobowl displays. Protobowl is also available offline--which is probably a good thing, since it crashes with great frequency and gusto.

As a cancer on quizbowl

Protobowl is notorious as the source of multiple problems in the quizbowl community. Mainly, its operators flatly refuse to do anything about rampant use of racial slurs and other inappropriate chatting on the site, which undoubtedly drives people away from quizbowl when they are sent to Protobowl upon asking how to get good. It is common to enter a Protobowl room and see every question being intentionally negged with offensive terms for various ethnic groups. When the site is not being trolled by racists, it is instead being monopolized by people who have memorized the 15 or so question sets in the database and make one-word buzzes based on identifying the question from the last time they saw it. The site also contains a file of abusive messages which it displays at anyone who makes a neg, which is surely very conducive to "welcoming new people" and other stated goals of the civility movement. 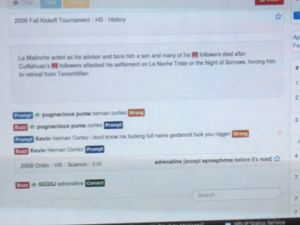 For some reason, there is a clique of high school players who believes that questions which cannot be learned from the Protobowl database are inherently too hard or illegitimate.

Protobowl is operated by a person who has possibly never played a quizbowl tournament, and only claims to have once been a non-starting member of a high school team that attends one tournament per year. As such, the site has no incentive to care about what is good for the quizbowl community. Repeated attempts to get the trolling and cheating under control have been either ignored or met with bizarre justifications for doing nothing, including a claim that forcing users to identify themselves by real name on a quizbowl simulator will lead to political persecution.

The best thing for quizbowl would be if the Protobowl server was burned to the ground immediately; failing that, we will just wait for the next time that the poorly coded site crashes, after which the non-quizbowl-involved person running it will hopefully not bother restoring it again. In the meantime, it is recommended that people stop referring new players to Protobowl when the endless "how do I get good?" threads on HSQB pop up.