The Judge is an iconic electronic lockout system that is manufactured and sold by Electramatic, Inc. of Minneapolis, MN. While it is unsure when The Judge first appeared, it may date back to the 1960s. It is also possible that it maybe the oldest system that still sees some use on the college circuit as of 2017.

The Judge is a self-contained system, with all of the parts fitting into a briefcase, with the lights on the outside of the case and the bare electronics in the inside. Players used pedal-like devices for signaling. It requires virtually no setup time, and break down was a matter of fitting all of the pedals back into the briefcase.

The Judge has a spurious reputation of never breaking. It is impossible to have a conversation about or around a Judge without someone making a joke about difficulty transporting it through airports, but no reports of serious problems doing so have been seriously communicated in the greater quizbowl community.

In August 2017, it was confirmed that Electramatic is still producing and selling The Judge. Some units occasionally show up for sale, with one selling for about US$150 in July 2017 on eBay and another selling for US$5 on shopgoodwill.com in April 2017. 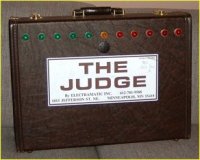