From QBWiki
Revision as of 21:15, 9 March 2022 by Connor Lee (talk | contribs) (Created page with "[https://buzzin.live/ Buzzin.live] is an online buzzer site. The site gained popularity with the rise of online quizbowl as a replacement for a physical buzzer system....")
(diff) ← Older revision | Latest revision (diff) | Newer revision → (diff)
Jump to navigation Jump to search

Buzzin.live is an online buzzer site. The site gained popularity with the rise of online quizbowl as a replacement for a physical buzzer system. 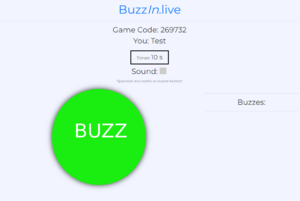 A screenshot of a buzzin.live game

One can either create a game or join a game on buzzin.live. Creating a game generates a six-digit code for players to enter. The lobby’s creator has the ability to clear buzzes, lock and unlock buzzers, use a timer, and kick or rename players. Joining a lobby displays a colored circle, which can either be green (unlocked), yellow (locked), or red (indicating a player has buzzed in).

While the free version is enough to conduct a standard game of quizbowl, keys to host premium games can be bought for a few dollars. Premium games open lobbies to more than eight players, allow moderators to keep score and create teams, and unlock several other customizable settings.

While buzzin.live has become most associated with online quizbowl after the 2020-21 season, the site has been used in in-person environments as well, often as an alternative to slapbowl. Examples include practices with little place or time to set up a buzzer system, games exceeding the normal 8-10 players most buzzers support, or games where a buzzer system is not readily available.