Rice is a private university in Houston, Texas. They regularly attend tournaments in Texas and Louisiana. 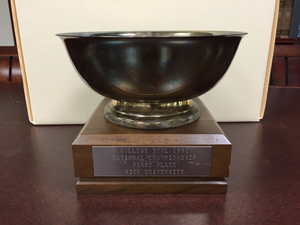 The Rice University Quiz Bowl club was founded by Zachary Yeung in 2008, shortly after he graduated from St. Johns. After Henry Gorman and Lauren Zook matriculated in 2009, Rice began winning most tournaments in the area. In 2011, Victor Prieto joined the club and began his four-year plan for reform, which aimed to create a self-sustaining model for the Rice quizbowl club. In 2012, Rice attended ACF Nationals and won 13th place, going undefeated in the middle bracket. In 2013, Rice placed 14th at ACF Nationals after Stanford cleared the second bracket, but due to having subpar NAQT knowledge, placed 19th at the 2013 ICT.