The Keyser Soze rule is a periphasis of a line from the film The Usual Suspects employed by Seth Kendall when asked about the way to become good at quizbowl, in which it is noted that to became powerful all one needs is "the will to do what the other guy wouldn't". 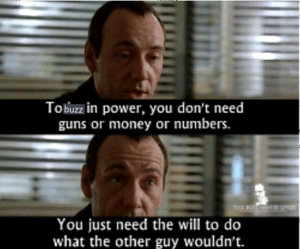 The prototypical example of this was the massive studying regimen in all subjects undertaken by Kelly McKenzie, Kendall's teammate at Kentucky, whose apartment was overflowing with notecards which he spent most of his free (and unfree) time perusing. More generally, this refers to individuals who seek out weaknesses on their team and explicitly study them to fill in gaps.