Nathan Weiser played for Kealing, LASA, and Stanford. He is currently a law student at Stanford. His accomplishments include a 2010 Texas Middle School State Championship.

Nathan Weiser wore the same blue-on-blue striped sweater to win the 2013 HSNCT, 2014 History Bowl, 2014 HSNCT, and 2014 NSC. After winning HSNCT on tossup 24, Flowers termed the sweater the 'victory sweater' and demanded that Nathan wear it to all subsequent national tournaments, which he did. It has since become famous in Texas circles.

Benji Nguyen gave one of Aaron Pellowski's old jackets to Corin Wagen to try and duplicate this feat, but thus far the jacket has not produced extraordinary results. 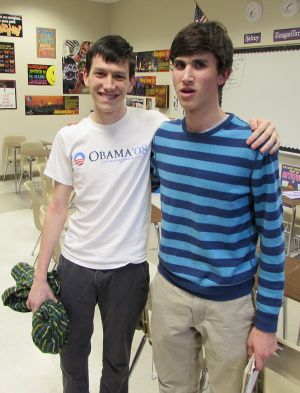 The sweater at Texas History Bowl state in 2014. 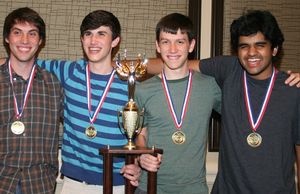 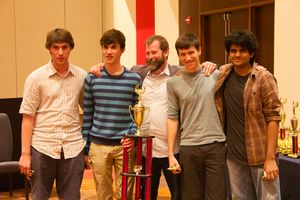 The sweater's last known appearance, at the 2014 HSNCT.
Retrieved from "https://www.qbwiki.com/w/index.php?title=Nathan_Weiser&oldid=52357"
Categories: