Quiz 'em on the air

"Quiz 'Em on the Air," also simply called "Quiz 'Em," was a TV and radio quiz show created for high school students in the early 1950s. With the earliest mention of it from 1951, it appears to predate the creation of the College Bowl radio show.

The show had its origins in a national newspaper column called "Quiz 'Em" that began in the 1940s that provided interesting bits of trivia with both questions and responses. At least some "Quiz 'em on the Air" competitions between students began by 1951. Though there had been a number of radio quiz shows before featuring individual students, Quiz 'Em appears to have featured school-based teams with faculty sponsors from the start and included both radio and TV versions.

Although it appears that the show varied somewhat in format between cities, it mostly featured current events questions on local, national, and international news drawn from local newspapers (who often served as sponsors). For instance, one question asked about the number of hours in a union workweek proposal. At least some questions, however, were drawn from general knowledge, including tiebreaks such as "How Many Stars Are in the Milky Way?" The specific format also varied; in some instances, teams were asked a series of directed questions and could answer for more points if their opponents failed to respond correctly. In other places, the two teams were asked the same questions separately with each team isolated from the other's responses. Some shows also awarded partial credit for answers.

In some areas, up to 16 schools competed during the course of a season; in others, schools appear to have played against the incumbent winning team. In Miami, on at least one occasion the "quizmaster" and judges agreed to hold a rematch after "misunderstanding" an answer to a question. Prizes generally included radios and TV sets as well as complete sets of encyclopedias and other books for school libraries, though at least one team also won an all-expenses paid beach vacation.

The show was portrayed in Detroit as a way to combat "juvenile delinquency."

In Miami (and possibly other areas, including Memphis), the "Quiz 'Em" leagues and competitions were racially segregated.

At least one TV/radio station appears to have continued running "Quiz 'Em" into the late 1970s.

Cities with Quiz 'em on the Air 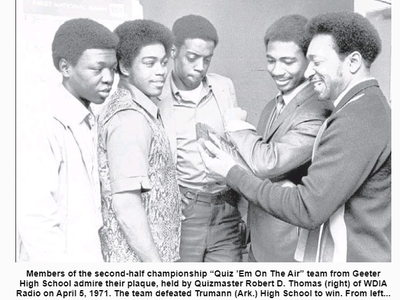 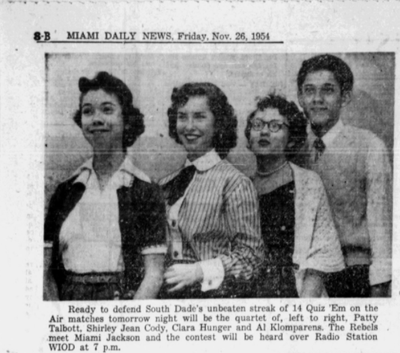 The South Dade (Miami) team in 1954; their continued success led to the format to be changed from a defending-champion model to a league model
Retrieved from "https://www.qbwiki.com/w/index.php?title=Quiz_%27em_on_the_air&oldid=51422"
Categories: