The 2004 West Chester East team consisted of John Stratton (captain), Elise Lenthe, Mike Bentley, Adam Neuman, Dan Christman-Crook, Greg Weber and Chris Anderson. Dan (sophomore) and Adam (junior) were the only non-seniors on the team. Their most notable accomplishment was winning the New Orleans regional of the National Academic Championship and taking fourth place overall in a match that featured hilariously timely questions like ones on the St. Louis Arch and "What did the Kyoto Protocol seek to do?" They also twice made the playoffs in Chip's Quiznet league.

Mike Bentley went on to play quizbowl at the University of Maryland. He also hosts the Quizbowl Podcast and is the administrator for this wiki.

John Stratton and Elise Lenthe briefly played on the Penn State team before it dissolved in 2004.

Dan Christman-Crook went on to play quizbowl at Pitt and attended the 2007 Penn Bowl. 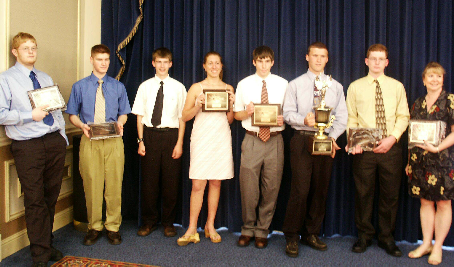