Arin Parsa (Class of 2025) is the captain of the Stanford Online High School team in California. Arin started playing academic quiz bowl in 5th grade as a founder and captain of the Challenger Almaden team, notable for its formidable performance in several regional and national tournaments. 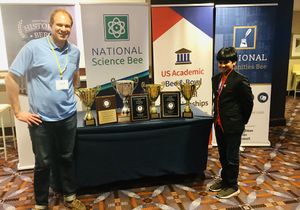 Arin was introduced to quiz bowl in 2015 by a televised match between Bellarmine College Preparatory and Valley Christian Junior High playing a match on Kron-4 TV.

In the 2017-18 season, a 5th-grade Arin led a Challenger Almaden team to great success in the Northern California quiz bowl circuit, winning all regular season middle school and novice divisions of several high school tournaments. Arin went on to place t-13 at the 2018 MSNCT while being second scorer overall on a team largely consisting of players younger than 6th grade. On December 1st, Arin was named NAQT Player of the Week.

During the 2018-19 season, Arin won the middle school division of the 2019 IPNCT by defeating Rohan Ganeshan from Quest Academy 185-70. He led the Challenger Almaden team to a t-28 finish at the 2019 MSNCT, where he was the top scorer, and was voted the top middle school player of the year in the middle school post-nats player poll conducted by Conor Thompson.

In the 2020-21 season, Arin started playing high school competitive tournaments and was the second highest contributing scorer after Karan Gurazada in the Stanford Online High School team. In the middle school division, Arin won the IPNCT for a second time, defeating Aatreyo Bhattacharya from Churchill Middle 350-170, solo'ed to t-4 finish at the MSNCT with the highest PP20TUH and PPB among 112 teams, and an individual prelim PPG of 168.12 surpassing the previously-held PPG record by Shiva Oswal.

In the IAC circuit, Arin won the National History Bee & Bowl in his grade from 2018-20. At the 2018 IHO, he won bronze in the Scramble and Hexathlon, latter jointly with Sasha Prakir. In 2019, Arin won the 6th grade division of the U.S. Academic Bee & Bowl, the National History Bee & Bowl, and the Humanities Bee, as well as placing second in the National Science Bee, making him the second player to win NHBB division titles in more than one subject (the first being Shiva Oswal). That year, he also made the upper bracket of the varsity History Bowl competition playing solo. In 2020, Arin won the Global Summer History League in middle school division and placed second in the Junior Varsity History Bowl, Winter League, playing solo against Hunter B. In 2021, Arin beat Churchill Middle to defend his U.S. Academic Bowl middle school championship title. In 2022, Arin won the Junior Varsity International History Olympiad.