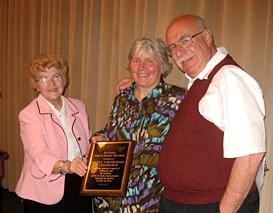 Matt's Buzzers is a charity set up by Sheryl and Mike Cvijanovich, the parents of Matt Cvijanovich. It awards grants to teams seeking to buy buzzer systems.

The charity was started in 2005, soon after Matt, who was an alum of Iowa State and a graduate student at Illinois, passed away suddenly. Teams apply for the grants by filling out a form that can be found at the Matt's Buzzers website, and the grants are usually awarded in December. The grants are worth $200 each, and some buzzer vendors give additional discounts to grant recipients.

Matt's Buzzers gives some of its awards in conjunction with the Rotary Northern Indiana Championship Tournament, and it accepts donations from charity tournaments, including some run by Donald Taylor.