Donald Taylor, also known as Da General, is a former quizbowl player for the University of Illinois. He is notable in the Illinois and Iowa circuits for being willing to drive to tournaments on many weekends throughout the school year as a freelance staffer and statkeeper. Donald served as the Treasurer of PACE from 2009 until his July 2011 resignation.

While playing for coach Tom Durbin on the MacArthur Generals, Taylor was widely considered one of the elite players in the state, earning consensus First Team All-State honors as a junior and a senior.

Taylor's junior year saw his MacArthur team win their sectional and qualify for the 2004 IHSA State Championship Tournament. The team did not advance from their formidable pool that included Auburn and Stevenson.

Taylor twice qualified for the finals of the New Trier Scobol Solo, and finished ninth both times. His first appearance in the finals was as a sophomore, making him one of the few sophomores to qualify for the finals. His second appearance was his senior year, in which he appeared in military fatigues, as later that evening he would be appearing at his school's football game as the mascot.

The 2005 Generals seemed to be on schedule to repeat as sectional champions and take the next step in the State Tournament, when an unreal event stopped them. Playing at Carbondale, MacArthur had a five point lead with one question to play. When Carbondale gave an incorrect answer, Taylor immediately gave another incorrect answer to prevent a teammate from giving a correct answer, and potentially allowing Carbondale to sweep a rebounded bonus. After the match, it was discovered that the score on the board was in error, and that MacArthur was in fact losing by five points. Carbondale won its final match and advanced to the State Tournament.

As a senior, Taylor was named to Team Illinois, and competed at the Panasonic Academic Challenge. His play was crucial in guiding Illinois to a third place finish in the tournament. 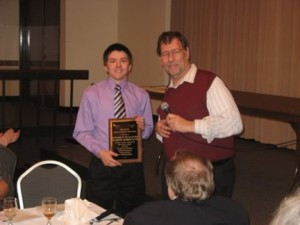 Taylor accepting the Friend of Scholastic Bowl Award for the ABT from David Riley.

In college, Taylor played for the Illinois Academic Buzzer Team (ABT) between 2006 and 2010.

Starting in his college years, and continuing after that, Taylor became a major force in high school quizbowl organization, particularly in Central Illinois. Taylor payed an enormous role in helping to improve the quality of the Masonic State Tournament. Taylor became one of the first people in Illinois to learn the art of keeping good stats for a tournament, and continues to be in high demand for that job, in addition to occasional moderating duties.

In 2011, representing the ABT, Taylor accepted the 2011 Robert Grierson Friend of Scholastic Bowl Award from the IHSSBCA.