SWATA is a deliberately-erroneous acronym for the Southwest Virginia Academic Team Alliance, a loose organization of Scholastic Bowl and quiz bowl teams in the westernmost 13 of Virginia's counties. SWATA tournaments are currently open to schools from the counties of Lee, Scott, Wise, Dickenson, Russell, Washington, Buchanan, Smyth, Tazewell, Bland, Wythe, Grayson, and Carroll Counties, as well as the independent cities of Norton and Galax.

SWATA started as a Facebook group founded by Honaker alum Jacob Mitchell in November of 2014 as a means for schools to trade news and scores from matches, and for alumni to follow along. Quickly the group turned into an organization hub for efforts to improve the game in the region, efforts that came to fruition over the course of the 2016-2017 school year. 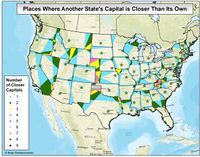 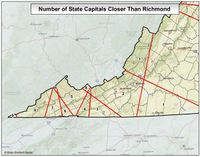 Regional map showing western Virginia counties' distances from other capitals vs. their distance from Richmond.

The first SWATA event held was an NAQT-based round robin competition between Honaker, Gate City, and Ridgeview. Despite being the only team of the three classified as a VHSL 1A school, Honaker took top prize over Gate City. The event's rules varied from the future format that SWATA would use in its NAQT events-- while later tournaments followed the straight 20/20 format with powers but no bouncebacks, the initial round robin featured no powers and bouncebacks on bonuses. SWATA tournaments are also unique in that even though games are untimed, coaches are still allowed one timeout per game.

In Fall 2016, SWATA organized its first tournaments with the goal of alleviating a number of issues that local teams had-- primarily travel time and entry fees. While these tournaments were unable to combat the region's primary issue-- a general lack of administrative support and understanding of quiz bowl-- reducing drive times and entry fees opened the door to several local teams that were interested in playing, but were unable to take lengthy road trips.

Southwest Virginia's primary barrier to the remainder of Virginia's quiz bowl circuit is lack of reasonable access. Prior to 2007, virtually no ACF-style quiz bowl tournaments were played in the region-- even when including "Greater SWVA" (the New River Valley and Roanoke). Once tournaments did begin to appear in Greater SWVA, teams with the fiscal means and administrative support were able to travel 2-2.5 hours to the New River Valley and compete, but usually no more than twice per year.

Teams in the SWATA footprint are continually faced with drives of 4.5 and 5+ hours to reach Virginia's "quiz bowl center", stretching from Northern Virginia down to Charlottesville and Richmond. To put it in perspective, any given team from the SWATA footprint is closer to at least four state capitals than they are to Richmond; most SWATA schools are closer to six or more. Furthermore, the westernmost portion of Virginia's Lee County is the only place in the U.S. where one is closer to nine other state capitals than to their own.

Exacerbating that issue is a lack of funding for quiz bowl from school systems in SWVA; many teams in the area are self-sustaining, i.e. operating with little-to-no financial contributions from their school or county/city school board. Thus, many SWATA tournaments feature significant discounts for new teams in their 20-20 circuit, including free entry for first-time teams (beginning in 2018-2019). SWATA's efforts to improve accessibility, team skill, and public awareness about the game have led VHSL Scholastic Bowl Commissioner Fred Campbell to dub SWVA a "hotbed of quiz bowl".

SWATA’s primary business in 2016-2017 has been the organization of a series of Saturday 20/20-formatted quiz bowl tournaments that were run at Honaker, Gate City, Richlands, and Tazewell. A fifth Trash tournament was run at Virginia High School (Bristol), and was opened to teams from outside of the Alliance as well as competitors of all ages.

Honaker's Caleb Perkins would finish as the #19 scorer at the 2017 SSNCT, making him the first player from Virginia's 12 westernmost counties to ever post a Top-20 individual finish at the national level. He also finished as the #12 individual among NAQT's new Very Small School-classified teams.

SWATA continued its 20/20 NAQT tournament circuit, albeit with some changes in the schedule. With an excellent location at Bristol and the added experience of hosting the first-ever SWATA Trash tournament, Virginia High volunteered to host the annual November tournament. With Richlands unable to host again, Honaker opted to take the December hosting slot, with Gate City hosting the second Legion Memorial Invitational Tournament in October, and Tazewell retaining January for its Bulldog Invitational Tournament.

Both Tazewell and Gate City competed at the 2018 HSNCT; Gate City finished with a record of 4-6, while Tazewell finished 3-7.

At the start of 2018-19, more than half of the schools in SWVA had participated in at least one SWATA event-- a sign of significant progress since only a handful of schools in the region had played 20/20 format prior to SWATA's creation. The third year of circuit play brought Richlands back into the hosting rotation as Tazewell ceased SWATA participation. Honaker took top honors in each of the three events (the 4th being their own Steele Memorial Invitational), making them the second team to capture the SWATA "triple crown"; Honaker's Aidan Cook-- the eventual 2019 SWATA Player of the Year-- was also honored by being the third NAQT High School Player of the Week to come from a school in the circuit.

Beginning with the 2018-2019 season, SWATA required players to participate in a minimum of two SWATA circuit events; previous years had allowed for players to be included on All-SWATA Teams based on either VHSL or SWATA circuit performances.