The Freeman Academic Team was founded in 1967, and it won the WWBT High School Bowl that year. Another title followed in 1970. WWBT changed the name of its tourmanent to "It's Academic," and the team had success in the 1970s. On the WCVE edition of "Battle of the Brains," Freeman won in 1980, 1989, and 1992. According to research by Dave Porter, Freeman also won the 1981 edition of the National Academic Super Bowl, as well as the short-answer (likely Buzzer race) competition in the all-Henrico County CLASSIC several times in the late 1980s and early 1990s. 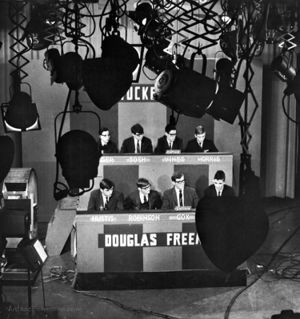 The success continued into the 1990s, as the Rebels won the second GSAC. They also had two semifinalists in the 1999 Duke Academic Festival, as well as numerous appearances at the 1990s Virginia Tech tournaments.

The team beat Maggie Walker by 15 points at the 2005 VHSL Central Region championship, becoming the only team aside from Gov to win the tournament, since the VHSL realignment has left Freeman and Gov in different conferences, regions, and groups. That same year, Dave Porter became the first two-time All-Star on "Battle of the Brains," by then on WTVR.

At Spotswood the next fall, the team placed second, setting the pace for the next two years.

In the 2006-2007 season Freeman was roughly the second-best quizbowl team in Richmond, with especially notable event in the form of a win over Maggie Walker A by 95 points. This occurred at the Ocean Lakes DAT I, and was the #1 upset in the country according to the David Bykowski ratings.

The 2007-2008 team finished second in the Colonial District competition, earning the team its third bid to the Central Region tournament in four years. At Regionals, the team went 6-1 to advance to its second state championship appearance. The team finished fifth in its second appearance at State. Late in the season, the team won the first edition of the Maggie Walker HAVOC by beating Collegiate in the final, led by Kevin McCall. As a result, the Rebels qualified for the 2008 NSC.

Later in Kevin McCall's era as the top player, the team also won trophies at the 2010 VCU NAQT Mid-Atlantic Championship, as well as 2008 and 2010 VHSL Regional Runner-up awards.

Freeman qualified for its VHSL Region in eight consecutive seasons (2007-13 in the Central Region, 2014 in 5A South).

After several years of dormancy, Freeman re-emerged in the 2017-18 school year, led by Will Chambers and Walker Barkstrom. They won the VHSL Region 5B Championship, ending a 13-year Regional title drought, advancing to their first VHSL State since 2010. They also defeated St. Christopher's to win the Battle of the Brains championship for the first time since 1992.

Freeman is also a unique team by the fact it had a numbered roster and official number shirts from 2003-2010. Numbers can also be retired by the team, which is believed to be another quizbowl first.

The Retired Numbers are