The forums, formally the Quizbowl Resource Center forums or hsquizbowl.org forums, are a public place for national quizbowl discussion, from the high school to open level. Historically referred to as the board or the boards, the forums also have several off-topic areas where posters can talk about whatever they want.

History of the forums

An early version of the forums lasted from fall 2001 to spring 2003, and was a little-used, HTML-powered board with no collegiate content. The bulletin board was re-created in April 2003 by Matt Weiner, who added collegiate sections at the suggestion of Chris Frankel. Since 2006, the hsquizbowl.org site has been financially sponsored by PACE.

In Winter 2008, the board had to change hosts not once but twice. In relation to problems with board hosting services, the administrators closed the forums down from approximately February 5, 2008 through February 7, 2008. After relocating to a new host, the main hsquizbowl.org page read "The message board is open again, at least until our current shady hosting provider decides to shut it off because they like to sell hosting plans they cannot support." That hosting provider prompted yet another move over the weekend of February 23-24, 2008.

Culture of the forums

Due to its use by Canadians, the word "packs" is automatically replaced with "packets".

In addition to all the straightforward bbcode smilies, the hsqb forums have several additional ones meant to reference various events in the game's history.

No new emoticons have been added in years.

The board is led by a chief administrator who was initially unelected, then for several years was chosen annually by all staffers, until Rob Carson forgot to run elections in fall 2015 and as a result has held the position due to a combination of general acclaim and inertia ever since. Under the chief admin are several administrators (currently six) and moderators (eight). The staff is responsible for enforcing board rules and helping new posters make use of the forums.

As a result of the 2010 cabal scandal, the site/forums are defined as autonomous in policy from PACE, who is a silent funding source & provider of basic technical assistance only. In practice, many parts of hsquizbowl.org work closely with individual members of PACE to provide resources for the quizbowl community.

Chief administrators of the forums

Current forums on the bulletin boards

Rules and Global Announcements, created in August 2006, contains all the regulations that govern posts on the board, as well as announcements that affect the entire forum community.

One of the two forums created from the split of the original Regular Season Tournaments forum in 2006, this forum contains announcements, field updates, and results for regular season high school tournaments.

National and Regional Comparisons and Discussions

In its original incarnation as Theory, it was one of the original six forums. This forum is still for general theoretical discussion of topics relevant to high school quizbowl, but is also a place where new high school players and coaches can ask for advice.

One of the original six forums, this forum originally was for five national tournaments: HSNCT, NSC, TOC, NAC, and Panasonic. Other national tournaments run through Beta Club, NHS, and other entities were later permitted in the forum. After the 2006 ASCN TOC debacle, this forum also contained information about the current situation pursuing legal action against ASCN.

One of the original six forums, this forum is for everything related to high school quizbowl that doesn't belong in one of the other forums.

One of the original six forums, this was the original forum for quizbowlers to discuss issues not related to quizbowl. This forum cannot be seen by non-members.

Fred Morlan began the board Football Pick 'Em for the 2003 season. At some point (2004?) this forum was created to house the Pick 'Em. Now it holds all sports talk. During the forum reorganization of 2008, it was made into a subforum of Off Topic. This forum cannot be seen by non-members.

Resurrected in December 2007 in preparation for the 2008 November elections, this forum may become an itinerant once-every-four-years addition depending on use and civility. During the forum reorganization of 2008, it was made into a subforum of Off Topic. This forum cannot be seen by non-members.

Blank of the Month Clubs

Created in 2008, this subforum of Off Topic holds all discussion regarding the forum Book of the Month club and similar clubs, or at least would if such things ever got off the ground. This forum cannot be seen by non-members.

One of the two original forums in the college section, this forum contains discussion about anything and everything in the college game, ranging from "If we hold a tournament on this date, will people come?" to "This is how you write good questions" to "Tournament X blew, and here's why". Until the addition of the Trash forum, discussion about trash tournaments went here.

This forum is for anyone seeking advice on starting a collegiate team, branching out into new types of tournaments, or other "how-to" aspects of collegiate quizbowl.

Added sometime after the college section, this forum contains everything related to the world of pop culture quizbowl.

Since its inception in 2006, this has been the "anything goes" forum on the boards. This forum cannot be seen by non-members.

Best of the Best

Since the archives forums were created, the auto-archiving process had moved several high-quality threads to the appropriate archive area, where they were lost amidst a sea of other posts. Thus, Best of the Best was created in May 2007 as a place for the threads deemed to have the most use to players, coaches, and others in the quizbowl community. Most of the threads currently in Best of the Best deal with how to write good questions and avoid bad ones.

Auto-archived threads from the high school areas of the board are collected here, including the epic "Bad Negs" thread, which was unfortunately allowed to lapse over the summer of 2007 after nearly three years of semi-continuous posts.

Auto-archived threads from the Off Topic and Sports forums can be found here. This forum cannot be seen by non-members.

Created in June 2004 and moderated by the inimitable Doctor Zaius, The Forbidden Zone contains the Worst of the Worst. Double posts, spam, and useless threads that no one should be subjected to are moved here. This forum cannot be seen by non-members.

Former forums on the bulletin boards

One of the two forums created from the split of the original Regular Season Tournaments forum in 2006, this forum contained discussion about regular season high school tournaments. In 2008 it was combined with Comparisons to form National and Regional Comparisons and Discussions.

One of the original six forums, this forum contained regional, national, and historical comparisons of "Who's the better team." In 2008 it was combined with Regular Season Tournament Discussion to form National and Regional Comparisons and Discussions.

"About collegiate quizbowl + doesn't fit elsewhere = goes here. This is the appropriate forum for the trade and sale of qb-related goods and services, as well as links to free packets." Originally moderated by Steve Kaplan before it was discontinued due to lack of use and subsumed into Discussion.

Created in December 2003 to house politics threads at the request of several posters, it was moderated by Stephanie Walker and disappeared sometime before or during the Great Fuckup of 2004 due to lack of use and a tendency for threads to get out of hand.

Created in June 2003 as Ad Hominem Ad Nauseum, this forum intended to contain all flamewars to a single forum instead of having them spill over into forums where real discussion was taking place. Perhaps the original AHAN thread, "Dude, you suck" survived the Great Fuckup of 2004 and can now be found in the Forbidden Zone. This inauspicious debut in no way foreshadowed the greatness that was to come.

This forum was created as the college section's counterpart to Off Topic. Forum rules required a picture of a non-national flag to be part of every post in the forum. Due to rampant inactivity, Matt Weiner closed the forum down on June 16, 2004. 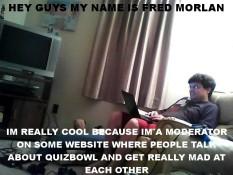