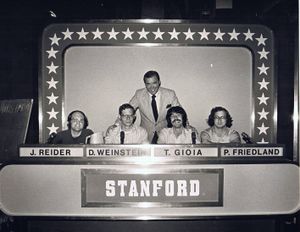 In the modern era, Stanford won an ACF Nationals title in 2010, achieved by the final team led by Andrew Yaphe.

In 2022, Stanford won ICT (defeating Harvard from the disadvantaged position in a two-game final) and placed second at ACF Nationals to a Matt Bollinger-led Georgia Tech.