Difference between revisions of "Chicago Open" 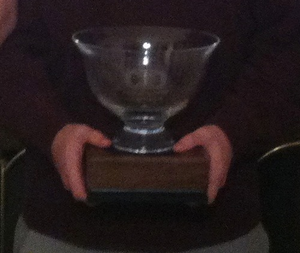 Chicago Open (or CO) is a summer open tournament held annually in the Chicago metropolitan area, generally occurring in the last week of July or first week of August. Its most distinguishing feature is its extremely high difficulty (far more difficult than the year's ICT or ACF Nationals), which usually makes Chicago Open the most challenging all-subject set of the calendar year.

The first Chicago Open was held in 1999 as the successor to Virginia Open, a similar tournament held at Virginia in 1997 and 1998. After many years under the stewardship of first Andrew Yaphe and then Subash Maddipotti, its editorship has rotated based on the interest and availability of well-regarded editors and players, with each new editor or editing team approved by its predecessor. After some early house-written events, CO has established itself as a true packet-submission event, for which every participating team must write a packet.

A true open tournament, Chicago Open attracts current college players, retired or graduated players, and, occasionally, ambitious high school players. Participants generally play on mixed teams not limited by school affiliation. Despite many long-graduated individuals making an annual trip to CO for the only tournament they still regularly play, 2021 was the first year since 2002 in which the winning team contained no players who were eligible, active participants on a college quizbowl team during the preceding academic year (and one player on that team became collegiate quizbowl eligible for the following year).

In most years, the tournament has been a full round-robin among all participating teams, which can last well into the evening. Since 2016, the event has run a shorter schedule using preliminary brackets and crossover games due to the demands of a growing field (this did not, however, stop the 2018 iteration from going past 11pm or the 2022 iteration from going slightly past midnight). The combination of the tournament's extreme difficulty and deep field makes the assembly of a winning CO team one of the most challenging accomplishments in quizbowl.

Chicago Open typically occurs alongside several side events; these have included a semi-regular trash tournament and subject tournaments in science, history, literature, and, more recently, a variety of arts events. Since 2011, the main tournament has stood alone on Saturday.

In 2014, Andrew Hart introduced a traveling trophy (pictured right), which some member of the winning team (hypothetically) gets to keep until the next year's CO is held. Its current whereabouts are uncertain.

Due to changes in room reservation convenience, each CO that has happened from 2018 onward has been held at Northwestern University in Evanston, Illinois, rather than its presumptive home in the city proper from 1999-2017 at the University of Chicago. It remains to be seen whether this change of venue is permanent. Jocular references to recent instances of the tournament as "Chicanston Open" or "Evanston Open" are largely discouraged.

Because the CO field draws a field from across the continent (and sometimes the UK), it is typicaly not mirrored elsewhere. From 2005 to 2009, Berkeley hosted a small West Coast mirror called BASQUE; smaller mid-Atlantic mirrors existed at various points in the early to mid-2000s [1].

To the dismay of editors who labored over finals packets, a team cleared the field at every Chicago Open from 2012 through 2017.